It may have taken the International Olympic Committee until 1998 to get excited enough about curling to recognize it as an official event, but enthusiasm for the game has been alive and well in St. Catharines for over 140 years. 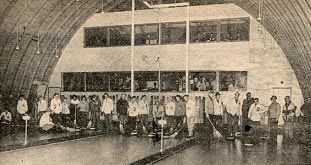 In one of the first mentions of curling in the area, the St. Catharines Evening Journal of December 14, 1866 refers to the Sons of Scotia Curling Club, a local curling group that remained active until 1868. This group evolved into our own St. Catharines Curling Club in 1869 and the first Club officers included Judge Lawder, Sheriff Woodruff, R. Lawrie and G. Ball.

The St. Catharines Curling Club's winning tradition began with its inaugural bonspiel against the Dundas Club in 1870. The St. Catharines Club won the prize of a medallion donated by the Royal Caledonian Club of Edinburgh, Scotland following a no show by the Dundasites.

Curling in the late 1800's took place outside on Twelve Mile Creek, weather permitting. As interest in curling grew, records suggest that a covered rink was constructed at Lake and Wellington Streets, with a subsequent rink located just east of the St. Catharines Arena. This building was later used by the Reo car top supplier and then as a roller rink before eventually housing wrestling and boxing matches.

The St. Catharines Curling Club was an active member of the Ontario Curling Association from 1869 to 1901. At that time, there is information to suggest that a fire in the building caused activity to stop and the Club was inactive for almost 50 years.

In 1949, a group led by Judge Thomas Darby held a meeting to investigate setting up a local curling club, and it wasn't until committee members S.E. Bullis, J.S. Elliott, A.G. Martin, W.J.C. Gooch, N.P. Bond and P.H. Sullivan invited an OCA representative to their meeting that they learned of the existence of the previous St. Catharines Club. 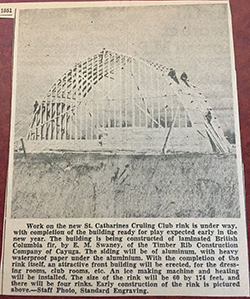 The work of this committee resulted in our existing facility on Grantham Avenue. Interest in curling flourished in the early days, and while the Grantham building was under construction during the 1950-51 season, a total of 165 St. Catharines members rented ice time and commuted to Welland to play.

The original building was completed in 1952, and since the rocks ordered from Scotland in 1950 were late in arriving, the Club borrowed rocks from both the Welland and Grimsby Curling Clubs until March 1953.

The Club building was once again destroyed by fire after a lightning strike in 1962 and after considering a merger with the newly-formed St. Catharines Golf and Country Club, the membership decided instead to rebuild the Grantham Avenue facility. The new building was completed in 1962 and has been hosting hundreds of curlers a year ever since.

In addition to the many local and provincial champions the Club has produced, the St. Catharines Curling Club is the home rink of two-time World Curling Champion Marilyn Bodogh whose team brought home the trophy in 1986 and 1996.